There’ll be an update on Ivory Terrors very, very soon. With any look, within a week or two I should have a cover, a blurb, and an official release date, all of which I will of course immediately share on here.

In the meantime, while it’s not quite as exciting, here’s a book review. And unusually for me, it’s a review of a real book, made of real paper. My beloved Kindle died a few weeks ago (this old post might give you some idea of my feelings on the situation), so until I get round to buying myself a shiny new Paperwhite, I’ve been desperately hunting down paperbacks, a skill I almost seem to have lost over the last two years. They feel all heavy in my hand and get soggy in the bath and I have to physically turn the pages. It’s like writing with a quill. Still, at least they don’t suddenly and inexplicably go blank… This review is dedicated to the charity shop near work, and its great collection of books that cost a pound. 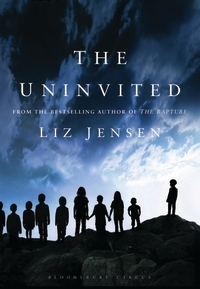 A seven-year-old girl puts a nail gun to her grandmother’s neck and fires. An isolated incident, say the experts. The experts are wrong. Across the world, children are killing their families. Is violence contagious? As chilling murders by children grip the country, anthropologist Hesketh Lock has his own mystery to solve: a bizarre scandal in the Taiwan timber industry.

Hesketh has never been good at relationships: Asperger’s Syndrome has seen to that. But he does have a talent for spotting behavioral patterns and an outsider’s fascination with group dynamics. Nothing obvious connects Hesketh’s Asian case with the atrocities back home. Or with the increasingly odd behavior of his beloved stepson, Freddy. But when Hesketh’s Taiwan contact dies shockingly and more acts of sabotage and child violence sweep the globe, he is forced to acknowledge possibilities that defy the rational principles on which he has staked his life, his career, and, most devastatingly of all, his role as a father.

Part psychological thriller, part dystopian nightmare, The Uninvited is a powerful and viscerally unsettling portrait of apocalypse in embryo.

Recently, I’ve tended to read books that I’ve heard a lot about and that come heavily recommended. I’d never heard of this book before I started reading it, and it’s not really my normal genre, but I spotted it in a charity shop and the premise – young children all over the world start killing their parents – intrigued me so much that I had to give it a go.

On the whole, I’m not disappointed that I did. Throughout, the writing is really brilliant, especially for what’s ultimately basically a thriller. It’s narrated by Hesketh, a brilliant anthropologist with Asperger’s Syndrome. I think the autistic narrator concept has been a bit overdone in recent years, and I groaned a little when I realised that it was being used here, but it actually worked really well. Making Hesketh extremely physically handsome but utterly socially dysfunctional made for an interesting dynamic – he gets about as much attention from women as James Bond, but let’s just say he doesn’t handle these situations quite as smoothly! I ended up really liking Hesketh, both as a character and a person, and his strange, fact-filled narration really made the book for me.

The plot of the first half was utterly compelling. There are several instances from all over the world of very young children killing their parents, and other instances of good employees sabotaging their companies and then brutally killing themselves. The connection between the individual cases and the two types of cases is unclear, but there are weird factors that keep cropping up – those affected eat lots of salt, eat insects, have problems with their eyes. They talk about being possessed by strange children, and in a very clever move, characters from around the world blame the same issues on different beings from their own superstition – whether that’s jinns, trolls or UFOs. Throughout this section, I was racking my brain trying to link together the little clues and work out what was happening. I also found it fantastically creepy and disturbing – perhaps even outright scary. I don’t know whether it was fear or the need to solve the puzzle of the plot that kept my awake the night that I read the first half in a mad rush, but I certainly didn’t get much sleep, and couldn’t wait to start reading again the next day.

The second half wasn’t bad, but it didn’t grab me in the same way. The more extreme the international situation became and the more people died or started displaying the odd symptoms, the less I cared. I was reminded of that old quote that “one death is a tragedy, a million is a statistic.” Furthermore, the story took an odd soap opera style turn, with far too much time spent on Hesketh’s relationship with his ex-partner, her new lover, and a behavioural scientist he was interested in. That said, there was a very well handled twist in the story of the breakdown of his relationship, and his bond with his stepson was utterly touching.

So even if it had dipped a little in my estimation, I was still rushing towards the end, dying to reach the big reveal, see how the crisis would be resolved, find out just how the little clues fitted together and find out what exactly had been going on. And then I reached the last chapter, and it did none of that. It reminded me of when kids write stories, tie themselves up in knots, panic and conclude with “and then I woke up and it was all a dream.” Okay, that’s not literally what happens – the events are perfectly real – but readers are given no proper explanation of how this has happened or how it’s going to end. Just as irritatingly, the narration suddenly takes on an overly heavy handed environmentalist message and seems to imply that all the murder and barbarism we’ve seen is okay, because maybe it will stop global warming.

In conclusion, this is a well-written and gripping thriller with an interesting sci-fi or paranormal edge and a great protagonist. It’s definitely worth a read, just don’t expect all the little hints and mysteries to coalesce. If it wasn’t for the ending and certain bits of the second half, I’d have considered giving five star, as it was I was so disappointed that it nearly ended up with a three. But it kept me thoroughly entertained and intrigued for hours, so I’ll just pretend the last couple of chapters never happened.