Still working through the holiday reading, here’s my review of one of those books that everyone suddenly seems to be talking about: The Shining Girls. 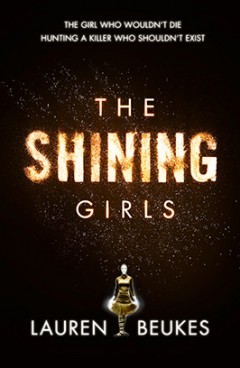 “THE GIRL WHO WOULDN’T DIE HUNTS THE KILLER WHO SHOULDN’T EXIST.

Harper Curtis is a killer who stepped out of the past. Kirby Mazrachi is the girl who was never meant to have a future.

Kirby is the last shining girl, one of the bright young women, burning with potential, whose lives Harper is destined to snuff out after he stumbles on a House in Depression-era Chicago that opens on to other times.

At the urging of the House, Harper inserts himself into the lives of the shining girls, waiting for the perfect moment to strike. He’s the ultimate hunter, vanishing into another time after each murder, untraceable-until one of his victims survives.

Determined to bring her would-be killer to justice, Kirby joins theChicago Sun-Times to work with the ex-homicide reporter, Dan Velasquez, who covered her case. Soon Kirby finds herself closing in on the impossible truth . . .

THE SHINING GIRLS is a masterful twist on the serial killer tale: a violent quantum leap featuring a memorable and appealing heroine in pursuit of a deadly criminal.”

As a general rule, I hate crime novels but love stories that make clever use of time travel, so I was in two minds over whether to read this book. The comparisons to Gone Girl, which I read last year and loved, finally persuaded me to give it a try.

Let me start by saying that I don’t agree with that comparison at all. They are two books that involve a crime and have an unconventional narrative structure, but that’s literally the only things they have in common. The things I loved about Gone Girl were the brilliantly quotable prose, the clever twist, and the unreliable narration. None of that is present here – it’s a much more workmanlike novel.

That’s not to say it isn’t an enjoyable read. It was an pacey thriller that made me want to rush to the end and it had a well-executed sense of creepiness. My favourite parts actually had little to do with either crime or time travel. I loved the vignettes about the different girls the villain killed. The idea was that he only killed girls who had a spark about them – some combination of having a huge ambition and/or wanting to change the world. I was fascinated by their stories – the transgender fifties showgirl, the woman doing a man’s job during WW2, the seventies procurer of illegal abortions. It’s just a shame they all died so quickly! I actually thought the heroine was one of the weaker characters, and it was hard to see what her “shine” was meant to be. I’d rather have had one of the women listed above be the survivor who is hunting him down.

Weirdly, I enjoyed it more while I was reading it than afterwards. Once I’d put it down, I had time to think about the weaknesses. For me, the big problem was that “time travelling serial killer being pursued by escaped victim” is a truly amazing premise, and the plot just didn’t quite do it justice. I’d have liked a wider spread of time periods (it spanned 1929 to 1993)but that’s just personal preference. More problematic was that I didn’t get quite enough sense of different times, and the killer seemed far too comfortable with it all – more scenes of him struggling to adapt to changing attitudes and technology would have been great. I like time travel when it’s really mind-bending (like in the Time Traveller’s Wife) and I didn’t get that here. In effect, most of the plot would actually have played out similarly without the time travel element. The times where the author played with this (the ending, the body in the bin, the first meeting with Bartek, some of the use of objects) were some of my favourite parts, and I really wish they’d been developed more.

There also didn’t seem to be that much rhyme or reason to how the villain had acquired a)the ability to travel through time, or b)this overwhelming urge to kill. He’s a psychopath who’s found a magic house, and that’s pretty much all the explanation you’re going to get.

In conclusion, this is worth a read if you want an unusual premise, an engaging plot, and a bit of a scare. Just don’t expect Gone Girl, metaphysical mind games, or a great deal of substance.

As a good deal of this review hinges on comparisons with Gone Girl, you may be interested in reading my review (4 stars) of it here: http://www.amazon.co.uk/review/R11UR2VBJCIBIW