Instead, today, I’ve got a review of a book by Neil Gaiman, one of my favourite authors. It’s his first book (which arguably shows), so I’m not quite sure how I’ve failed to read it earlier. One of the nice things about finally having completed the Cavaliers is having plenty of time to read without feeling guilty, so expect several reviews over the next few weeks.

Under the streets of London there’s a world most people could never even dream of. A city of monsters and saints, murderers and angels, and pale girls in black velvet. Richard Mayhew is a young businessman who is about to find out more than he bargained for about this other London. A single act of kindness catapults him out of his safe and predictable life and into a world that is at once eerily familiar and yet utterly bizarre. There’s a girl named Door, an Angel called Islington, an Earl who holds Court on the carriage of a Tube train, a Beast in a labyrinth, and dangers and delights beyond imagining… And Richard, who only wants to go home, is to find a strange destiny waiting for him below the streets of his native city. 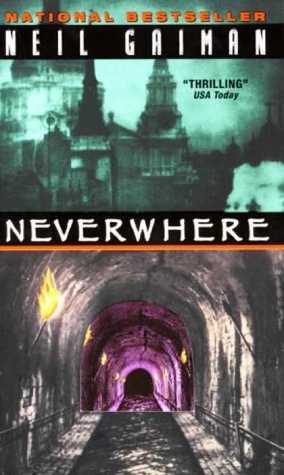 I was torn between giving this a four or a five. Thanks to a few niggles that I’ll come to later, I eventually settled on four, but I can’t emphasise enough that this is a really entertaining book and if you like Gaiman’s work or are a general fan of fantasy, you should definitely give it a go. I read it more or less in one long sitting (large parts of it, ironically, on an hour long tube journey) and the plot really propels the reader along.My favourite thing about the book was the writing style, which is unusual for me, as I tend to be much more interested in the plot. But how could I not love gems like:“he had made a point of telling each of them that he liked to kill things, and he was good at it; and this amused Mr Crup and Mr Vanemar, much as Genghis Khan might have been amused by the swagger of a young Mongol who had recently pillaged his first village or burnt his first yurt.”“A table for tonight was impossible: if the Pope, the Prime Minister and the President of France arrived this evening without a confirmed reservation, even they would be turned out into the street with a continental jeer.”Lines like these reminded me of Pratchett, which isn’t surprising considering the two of them wrote Good Omens together.I also liked the main character. Richard is a mild-mannered Scot, who’s fairly out of his depth in London with his overbearing girlfriend, and even more out of his depth in the fantastical London Below, with various people out to kill him. From the moment he helps what appears to be a young injured homeless woman (but who turns out to be much more) it’s clear that’s he’s basically a lovely guy – something far too rare in fiction. He also acts broadly realistically when confronted by the terrifying and unbelievable. He doesn’t suddenly become ultra-heroic, neither does he run away. He carries on being broadly decent, while still being horribly confused and scared, and ends up doing some heroic things in the process.The other characters left me in two minds. They were almost cartoonish – sadistic killers, charming but unscrupulous cad, deadly huntress, cruel seductress. Now, I know full well that Gaiman can write gloriously subtle, nuanced characters, so this degree of near one-dimensional characterisation has to have been deliberate. And part of me really enjoyed it – who doesn’t enjoy a truly evil villain, after all? But another part felt like I couldn’t quite connect with them or care that much about them. I sympathised with Door, the female lead, but I didn’t feel that I even really got to know her.The plot was undoubtedly original, hinging on the existence of a parallel London that lurks beneath our own – a world of both fantasy figures named after famous London landmarks and tube stations (or maybe the stations were named after them) and people who have fallen through the cracks of society through homelessness or similar misfortune. It was a great premise, and the author undoubtedly had some fun with it. The author’s introduction claimed that he wanted to create an adult version of Narnia, and to a large extent, I think he succeeded. I’ll henceforth look at empty, darkened tube trains with all the excitement I used to muster for looking for secret doors in wardrobes (seriously, I used to do that worryingly regularly!)I did, however, get the feeling that slightly more could have been done with it. The plot felt somewhat episodic and surreal. I enjoyed the story, I really did, but I sometimes felt that we were bouncing from one strange happening to the next with no rhyme or reason. More than the full blown fantastical stuff, I enjoyed the bits that played with the boundaries between fantasy and reality, for example when Richard started to be forgotten by everyone in London Above, or when the characters attended an art exhibition and his old and new life collided.For all that it was supposed to very much be about London, apart from the names, I almost felt it could have taken place in any city. American Gods felt firmly routed in various parts of America, and this just didn’t quite have that sense of time and place. More adventures in defined and unique geographical locations would have helped, but more importantly, I’d like to have seen the plot and the characters be linked into London legends and folklore and history. One obvious example – Old Bailey is a man who lives on roofs and both eats and befriends birds. I couldn’t help thinking it would have been better if he had been a personification of the statue of Blind Justice that actually sits on top of the Old Bailey court. As it was, he had the name of a London landmark with no obvious connection to it, and the same could be said for other characters, such as Serpentine. The ones that worked best where probably the Black Friars, who seemed to have both some resemblance to the historical order that gave that station it’s name, an interesting extra dose of magic, and some relevance to the plot.I got the impression that there were huge amounts of detail of London Below history and tradition that lurked in the author’s head and never made it into the book. I’d have liked to know more about who the Seven Sisters were, what the deal was with the magic spear, who the Barons are that people supposedly all owe fealty too (must be something to do with Barons Court I suppose). There’s some fun in knowing there’s a world beyond what’s spelt out on the pages, but a little more detail would have helped me to truly love this book rather than merely enjoy it.

On the subject of reviews, I currently have 99 reviews at Goodreads (across the three books). I’ve you’ve read one of them and never reviewed it, why not give me my hundredth review!